We cannot help wondering where Gloria Bell will end up.

Played by Julianne Moore with a big heart and a fragile edge, Gloria's been on her own since her divorce 15 years ago.  She’s not going to inherit from her mom who’s living long enough and well enough to exhaust her own retirement money.

Her employer downsizes Gloria’s coworker, an older woman not yet ready to retire.  Puts her out the door with not a little foreshadowing as to what might lie ahead when Gloria herself triggers that same age + salary-schedule nexus.  Her kids are grown and immersed in their own lives.

And her goals are non-specific.  What does Gloria want, beyond dancing? 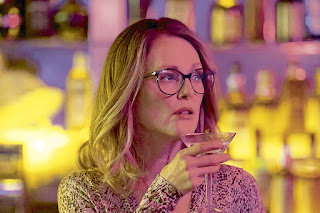 But there is something in Gloria.  Let’s call it an urge to live.  To live life.  To move forward.  To find a way, her way.  To avail herself.

So because she loves to dance, she goes out to dance, alone, and dances.  She joins people she encounters and  converses most superficially.  She attends a women’s support group and belly laughs on command. 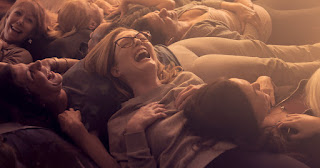 Gloria seeks meaning, perhaps, or a bond, a tether by which she can pull herself along.  Is she too far off center?

It’s sad in the writing, but Gloria Bell is not sad.  That’s the beauty of Alice Johnson Boher’s adapted screenplay and of Julianne Moore’s compelling, poignant performance.

John Turturro is mightily appealing as Arnold, a distinct possibility for Gloria.  He has us yearning, for he also seeks and is bound by forces that hobble.

In a romantic scene that will live a long, Arnold reads to Gloria from a book of Latin American Poetry, “If you were water, I’d be a glass; If you were light, I’d be and eye; If you were a foot, I’d be sock..”  Oh man!  That would work, wouldn’t it?!  You had me at sock!

Sebastian Lelio delivers a lovely production with pacing and characters that hold us rapt.  Julianne Moore brings us Gloria Bell, who confronts life as she sees it and who takes the hits for her approach.  We pull for her and wish we could navigate for her when we see what she does not. 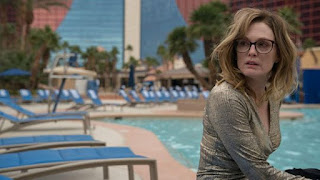 Makes you want to dance. 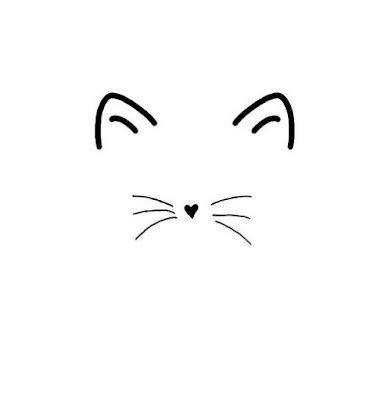 Julianne Moore in The Big Lebowski with Jeff Bridges
Jeff Bridges in R.I.P.D. with Kevin Bacon