Murder on the Orient Express


Murder on the Orient Express

Overheard during Previews of Coming Attractions:  “Well, I like Liam Neeson, but that looks stupid.”

We feel ya, lady seated in the next row back.  We like Kenneth Branagh, and Johnny Depp, and Judi Dench, and Willem Dafoe, and Michelle Pfeiffer, and Penelope Cruz (well, sorta), and Josh Gad and Derek Jacobi…but this movie is stupid.

OK.  Maybe we’re out of line to say such a thing about this lush production full of all these beautiful people.  There were at least a couple of noteworthy elements to this 70mm spectacle:  1. Branagh’s mesmerizing mustache and 2. that super cool avalanche. 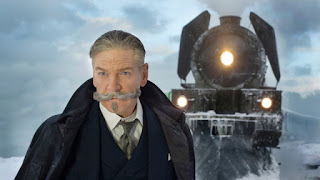 It probably is unjust to impugn a film when you’re not the intended audience.  And there was fair warning.  We knew going in that it was an Agatha Christie murder mystery; that Hercule Poirot would treat us like Perry Mason treated our mothers back in the day – rudely!  Condescendingly – as though they were in the room, but unworthy of a glance let alone intelligent participation.

But we went to MOE anyway.  The previews were just so pretty.

Also, we grant that it’s not reasonable to downgrade a movie that we slept through, even if we snoozed only a very few minutes, 10 at the most.

But let’s be clear:

Hercule Poirot is not normal.  Yes, yes, we know, that’s the premise.  He’s extraordinary.  By his own declaration, he’s “probably the greatest detective in the world.”  But come on – nobody is that deductively gifted.  Nobody. 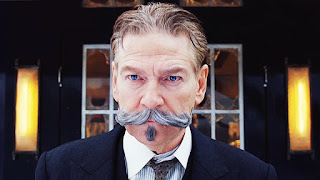 We wanted to set aside our disbelief, but we just couldn’t.  Maybe because he is so irritatingly smug as he plies his powers of observation; though admittedly Branagh in the role brings a more likeable facet to Poirot, maybe when he gazes regretfully at the photo of his long-lost love, Katherine. (It’s actually a pic of a young Emma Thompson, Branagh’s ex!)


And once, when he was rejecting the gangster Edward Ratchett’s (Johnny Depp) request for Poirot’s services as a body guard, did he seem to be acting on normal, believable human instincts. 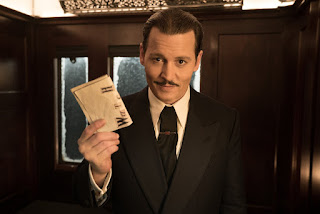 The rest of the time Poirot ricochets from suspect to suspect, exposing their most obscure inclinations and carefully secreted skeletons with barely a glimpse of their knuckles.  He revealed Gerhard Hardman (Willem Dafoe) as a phony because of a misplaced accent on one syllable of one word!  Lucky it had no impact on the plot.

Hercule Poirot doesn’t play nice.  He has all the good clues and won’t share them.  His mode of operating is to spring them on us when it’s most likely to make us, embodied in his shadow tagalong, feel dumb – less competent, less insightful – than HE is.  We want to play along with the detective thing and feel at least dull-normal in our ability to track.  But Poirot keeps all the real clues for himself, never giving the viewer a fair shot. 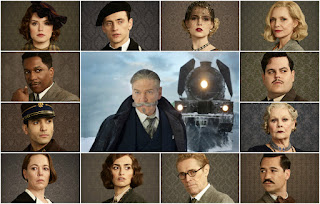 Speaking of which:  Too many red herrings!  O.M.G!  Every passenger has a perfectly good motive and opportunity.  The ins and outs of the convoluted threads of the intertwined lives of the complex relationships and the improbable likelihood of their all having E-tickets on the same train on the same day, across this scary computer-generated landscape – well, it’s more than an earnest crime solver can endure.

The resolution is beyond implausible.  Don’t worry, we won’t spoil it for you here, but rest assured, if you’re a normal, investigation-loving, CSI-bingeing, Forensic Files geek, you will be so pissed off by the time you get to the Last Supper tableau in the finale, you’ll want to turn on your cell phone right there in the theatre and, and, and...what?  Call your mother?  Tell her what she already knows:  All this exposition of the unexplainable (in reasonable, believable terms) makes a movie-goer want to spin around and explode. 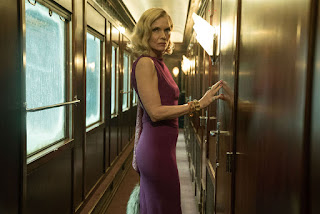 Perfectly good actors left us unmoved because even though MOE is a period piece, NOBODY ever thought those thoughts or plotted those plots or did those things.  In this script their characters are useful only in delivering misdirection. So Golden Globe winner & Oscar nominee Michelle Pfeiffer, as Mrs. Hubbard, is only to be avoided.  Golden Globe & Oscar nominee Willem Dafoe, as Gerhard Hardman, barely rates a dismissive shrug.  And Golden Globe & Oscar winner Judi Dench – Dame Judi! – whose glances can wither, seems bloodless and full of moth balls. 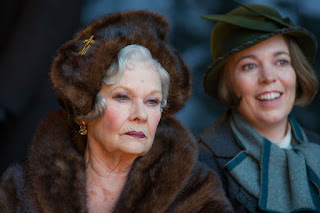 Only Daisy Ridley, as Miss Mary Debenham, truly engages and challenges Poirot, and grips the audience with a true air of mystery. 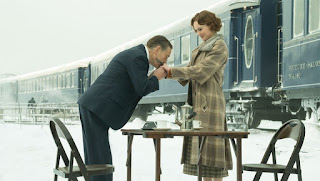 So, yeah.   We probably weren’t the intended audience and this is a biased review.  This story, this movie, is of a time gone by.  If you can still enjoy Sherlock Holmes talking down to sweet old Watson, you’ll be fine.  If you don’t mind being treated as a lame second fiddle rather than a full on partner in solving the crime, well, this is the show for you.  Have fun watching Poirot in action.

For today's mystery fans and crime solvers, not so much. 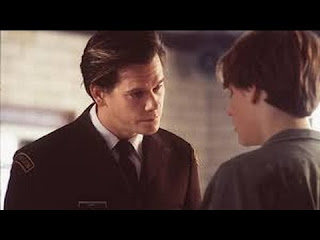 Daisy Ridley in Murder on the Orient Express