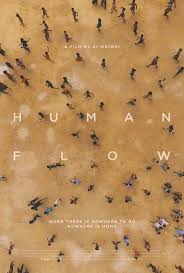 Ai Weiwei, artist and activist, made the film, Human Flow, to call attention to a humanitarian crisis across the globe – that of refugees.  He traveled to 23 countries documenting the plight of throngs of people – hundreds of thousands; millions – forced to flee their homelands because of the violence of war, religious persecution, drought, plague of disease and every other creator of misery known to man.

We get the impression early on that Ai kept a written journal along with his video journal, and somewhere late in the process, maybe in post-production, the pages of the journal were torn from their binding and scattered in the wind.  He collected them all and reassembled them with little concern for chronology, context, or linear thinking.

He’s an artist, after all. 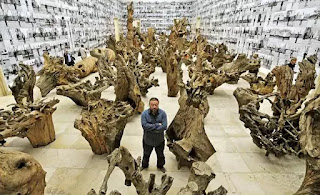 His product is beautiful in so many aspects.  Breathtaking images of sunsets, seas, and the mesmerizing faces of human beings are jumbled in with heartbreaking sequences of the surge of humanity that repeats itself apparently without end.  People – families, children, elders, teens, parents – displaced through no fault of their own and caught up in an overwhelming and all-encompassing search for the peace that would come with a place to rest.  Periodically, a crawler across the bottom of the screen, like a wire service offers headlines related to the images; or a sentence or two of text appears upper right to orient the viewer – place of origin, ethnicity, numbers of refugees, destination and the like.  We are globe-hopping and in a sense, the confusion of the images reflects the confusion of the world of the people who must move and keep moving.  Where are we?  Where will we go?  What obstacles will greet us? 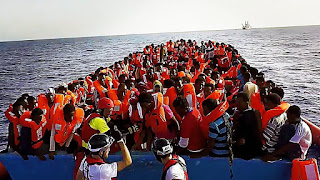 Ai himself appears multiple times in the course of his sweeping 140 minute compendium.  Sometimes we wonder why.  How does this haircut, or that ride in the car contribute to the film’s purpose?  At one point, we see him sitting in a folding chair on a rise in the land.  It’s windy day and he’s holding a clipboard at his chest with a handwritten message on the top page, the edges flapping wildly.  Wait.  Did that say, #standwithrefugees?  Pretty sure that was it just before the page was whipped out of his grasp.

Most poignantly, in one scene, he jokingly trades passports with a young man in the Balkans, perhaps making the point that except for our places of birth, any of us might find ourselves in the predicaments of those depicted here.  Or, possibly, Ai was reinforcing his very real solidarity with the people he filmed, given his own tumultuous history with China and his belief that returning to his home there is now ill-advised and unlikely. 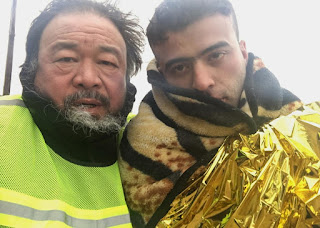 Perhaps the film is too long and too unsettled because Ai’s mission grew as he worked.  Nevertheless, we come away with several undeniable truths:  The horrible capacity of human beings to deny the humanity of other human beings for the most selfish and shallow ‘reasons.’  The ongoing, never-ending phenomenon of the human flow and the lack of enlightenment around it.  The familiar reserves of love and the vast will to live.  The resilience of children.  The futility of walls.

Indeed, Ai doesn’t mention the United States until the end of his film.  He sets up at the border wall separating theUS and Mexico, where with not-so-subtle irony he pokes a finger at our efforts to carry on with useless, wrong-headed thinking.

Ai said he did not want to make a traditional documentary and in that, he succeeded.  He set the brutality of the refugees’ existence against the beauty of our natural world – a paradox that stays with. 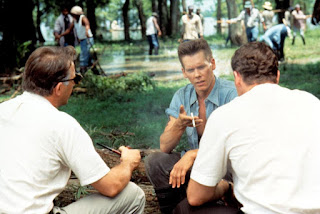