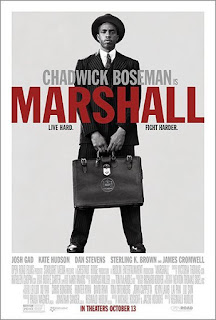 The movie which bears his name opens at a point in his life when he’s already successful, having founded the National Association for the Advancement of Colored People’s Legal Defense and Education Fund – when he was 32!  By this time he had argued and won  cases before the Maryland Supreme Court and the United States Supreme Court. 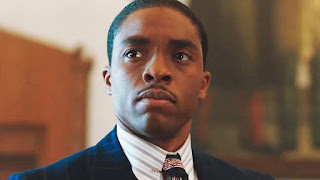 Marshall knew the importance of this milestone case, but he never lost sight of his bigger, long-term goal.  So where did he get the world view?

Here we see Thurgood Marshall with the same qualifiers as many 32-year-olds before and since might claim – brains, education, good looks and good health – but that vision!  That sense of a greater wrong that must be righted and his own mandate in the task.

Writers Jacob and Michael Koskoff chose to devote screen time to hint at Marshall's infidelities and to make sure we know he roomed with Langston Hughes at Howard University.  We see that he was on the road when his wife suffered a second miscarriage.  But they offer a scant few lines of dialogue about how this grandson of a slave spent his childhood or the family or village around him that engendered his vision and sense of purpose.

We can only surmise that his momma sure did raise him right.

Chadwick Boseman brings to the screen the magnetism that Marshall must have embodied.  We are compelled to watch him as those in his presence must have been compelled to see the logic, indeed wisdom, of his arguments.  At times, he’s overbearing and arrogant, confident when others can’t see why.

While Marshall’s success in this particular case is important and indicative of his enormously significant body of work, a smaller success is also notable in that big picture.  Marshall not only knows how to bring the Constitution to bear in courtrooms where he is sent to defend those wrongly accused – and almost surely convicted – because of their race; he also provides an irresistible role model to men of conscience around him.

We witness this in the transformation of Sam Friedman, previously a tool of insurance companies, making his living finding technicalities to defeat the most needy of plaintiffs.

Hudlin's direction is herky-jerky in this regard.  On the one hand, Marshall brow beats Friedman into compliance in their artificial and forced relationship.  (Boseman carries this off with aplomb.)  Gad comes off too much befuddled and tentative given that he/Friedman already had questioned the morality of beating down the defenseless in his small world of corporate law. 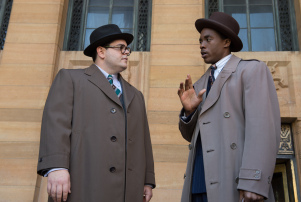 The point is that in the presence of Marshall's insight and his acumen, Friedman grows into his potential and, we learn in the postscript, dedicates his own life to the cause.  A most gratifying benefit of Thurgood Marshall’s great mind and singular clarity.

Presiding Judge Foster came around too, after unfairly quashing multiple objections and thereby advancing the racist mindset of the times and the system.  Ultimately, his conscience falls in step with his legal training and he lets key testimony stand, tipping the case in Marshall’s favor.    James Cromwell’s portrayal of the initial entrenchment brings weight to the change.  Even if incremental, its value cannot be denied.

Marshall tells us an inspirational story about a remarkable man with a sense of his own place in history and how he helped change the world.  In the movie's final scene, the inclusion of Sybrina Fulton and Tracy Martin, parents of Trayvon Martin, leaves us with a powerful reminder that much remains to be done. See it and say to yourself, what will I do? 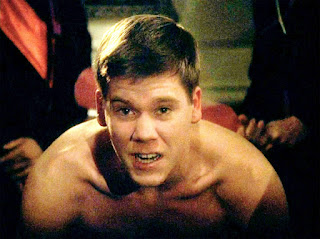